Joyoshare VidiKit - Video Converter allows easy conversion of videos to different output formats such as WMV, MOV, MP4, AVI, MPEG and the like. This tool is popular for its unmatchable speed, reaching up to 60X speed. More than that, it well supports MKV files with multiple tracks and subtitles so that you can freely switch whichever you want. There is even built-in video editor to let you refine your file by applying effects, adjusting saturation, rotating, flipping, trimming and more. 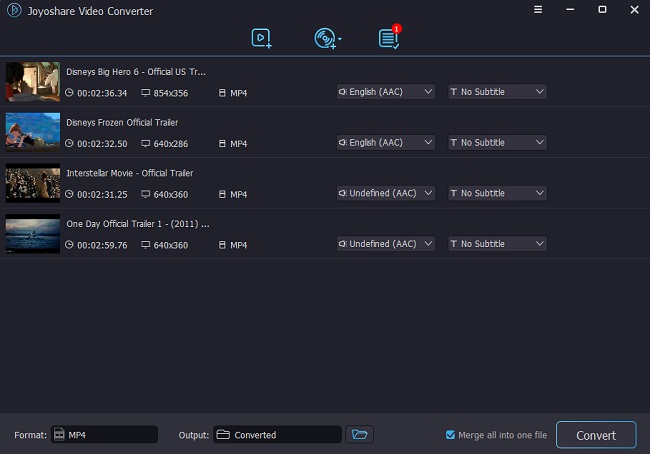 HandBrake is an open-source, free MKV converter for Mac, Windows, and Linux. It is stable, flexible, and secure. It has many presets that make video conversion straightforward. Users love the software because it supports batch processing, making conversion efficient. Although powerful, Handbrake has an unfriendly user interface which can be intimidating for people new to the software. Also, it can only convert to MP4 or MKV output format.

Cons:
Interface is not user-friendly
It is built for professionals

FFmpeg is another open-source MKV file converter people use because it grants users better control during conversion. It is a popular tool that is compatible with different output formats. Also, it’s useful to transcode both common and uncommon media files for you. While functional, FFmpeg is made for pure professionals and is not suitable for newbies. This is due to the need to understand the command line used for control.

Pros:
It supports many formats
Include encoders and decoders for many media files

Cons:
Require learning a command line
It is sophisticated

Xilisoft MKV Converter is a fast and efficient MKV converter with a load of features. It is compatible with many formats, including MKV, H.264, H.265, MP4, MP3, WMV, XviD, AAC, etc. Aside from being an MKV file converter, it is also a video editor and player. Hence, you can adjust the frame rate, bit rate, and other parameters. You can also extract audio from the video files.

Cons:
Can be laggy
It has compatibility issues sometimes

CloudConvert has a simple and user-friendly interface. Hence you can easily use it for converting MKV files. The online free MKV video converter is also suitable for converting documents and pictures. It allows you to import from your local storage or the cloud. While functional, it is only available online and has size limitations. Such tool can be a good option for those who value accessibility and ease of operation.

Pros:
It has preset properties
Simple and user friendly
Quick access with no downloading

Cons:
It requires an Internet connection
With a limit on the size of MKV video files
Difficult to convert large files

FreeConvert is a video converter compatible with MKV and can convert to different output formats such as MP4, AVI, and WMV. This fast MKV converter can convert up to 1GB of video files. It also allows you to adjust parameters such as screen size, aspect ratio, and bitrate. It gives possibility to import files from your local storage or the cloud.

Pros:
Adjust parameters such as bitrate, frame rate, channel, etc.
Have editing functions
It is free and easily accessible

Cons:
Full of ads on the screen

VEED.IO is an excellent online MKV converter you can use to get your device's compatible video format. Aside from being a converter, it is ideal for subtitling and editing. Other features supported by this tool include noise reduction, compression, and transition. The free version is wonderful. However, you can only enjoy the online converter by going premium.

Pros:
It has many editing features
It avoids slow file transfer
It is cloud-based

Media Converter is a popular MKV converter on Android known for its simplicity, lightweight, and ease of use. It has an archaic UI but is easy to use. It supports many video formats, including MKV and can quickly convert to others. You can also convert MKV files to audio formats such as MP3. Media converter allows you to edit the video and change some audio and video parameters such as bitrate, sample rate, and quality.

Pros:
Convert your files on the go
It supports many audio and video formats

MKV Converter, MKV to MP4, is an iOS application that enables you to convert MKV files to several output formats such as MP4, MOV, WMV, and MPEG. It has an excellent conversion quality; it is fast and free. It also has no limit on the size and type of files it is compatible with. You have the right to adjust the video size, bit rate, aspect, and frame rate.

Cons:
Conversion speed is low to deal with large files

MKV files might not be compatible on some devices. Therefore, you might need to use an MKV converter to convert the video files to other formats such as MP4 or others you like. This article introduced different MKV converters based on different devices you can use. Are you stuck with an unplayable MKV file? Try one of the MKV converters above.

Home >  Resource >  Reviews >  Top 9 Best MKV Converter in 2022
Joyoshare uses cookies to ensure you get the best experience on our website. Learn More